What is a hydraulic cylinder?

In the hydraulic transmission, the medium is liquid, usually oil, of which we are also talking about this text. The basic concept of hydraulics is that when the power machine rotates the pump, a volume flow is formed (the volume of liquid passing through the cross-section per unit of time, which’s unit in the SI is m3/s). The pressure of the hydraulic system is determined by the load which is caused either with the cylinder or valve which then resists the flow of the liquid flow caused by the hydraulic pump.

The pressure spreads evenly to every direction in the system and effects to all hydraulic system’s closed spaces’ surfaces evenly; this effect is called Pascal’s law.

So, cylinder’s hydraulic energy is transformed back to a mechanical movement. When the pressure comes to chamber A, the rod pushes out and therefore the force pushes out (F = p x A1). As counter motion in a double acting cylinder as the pressure comes to chamber B, the rod retreats in and also the force retreats in (F = p x A2)

Example illustration: an illustrated cross-section of a double-acting hydraulic cylinder.

Double acting hydraulic cylinders operate to two directions; the cylinder is moved to two directions with hydraulics as in back and forth or out and in. Piston separates the chamber and as the oil pressure effects the piston, the piston moves the rod –  the oil effects to the piston’s front or back (example illustration 2) – when the cylinder rod moves to both directions.  Double acting cylinders are used for example in excavator’s booms; the excavator’s coop needs to be moved back and forth and these both movements require a great amount of force.

A double acting hydraulic cylinder’s structure is illustrated in the picture below: 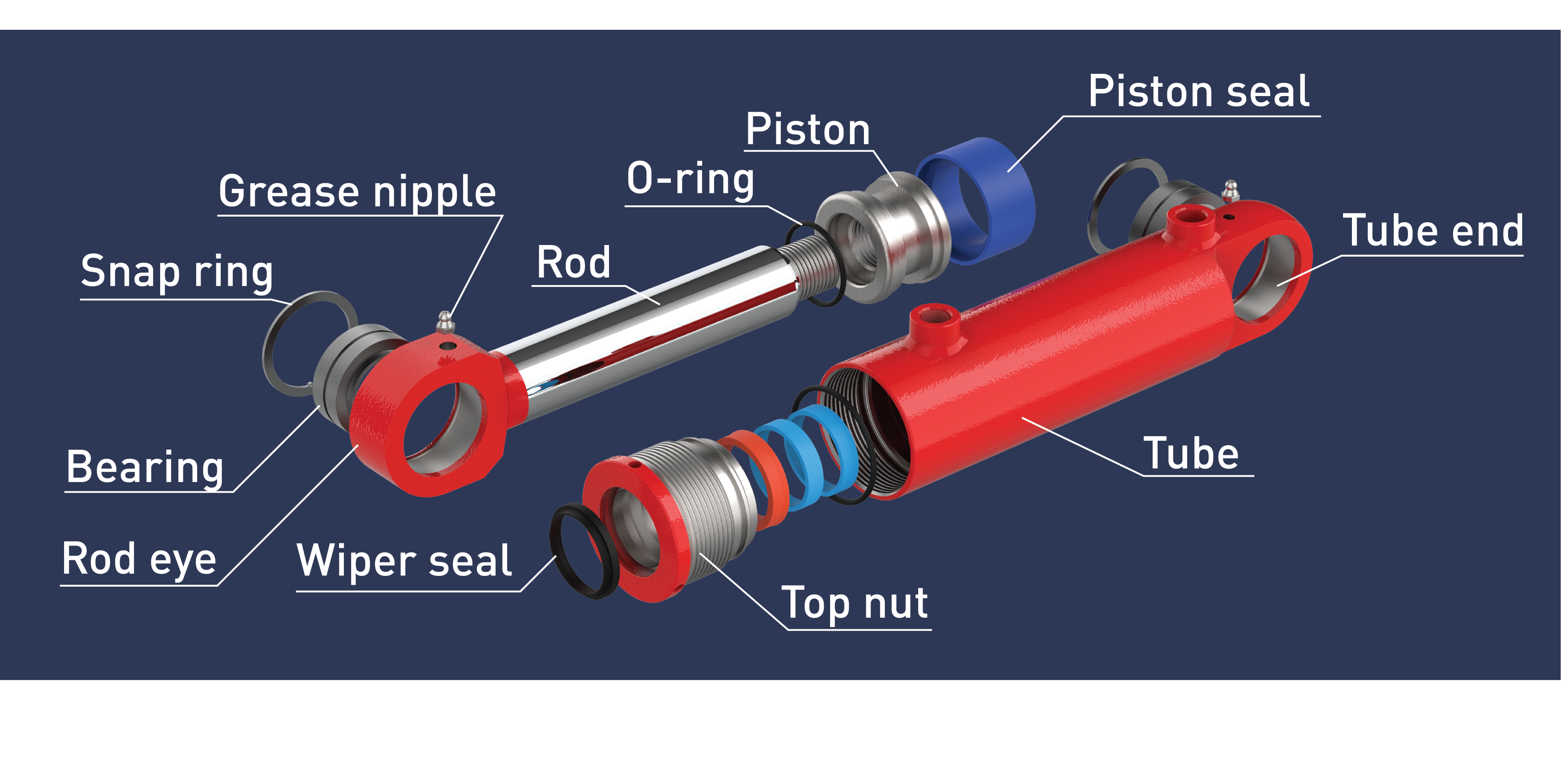 The mission of the seals is to keep the oil in the right place; in the case of a hydraulic cylinder the oil needs to stay in the right chambers. There are different kinds of seals. For example, an O-ring or other kind of pressure seal are placed in a groove: as the oil flows, the oil pressure pushes the seal to the other end of the groove and the seal is compressed and presses to the sealing surfaces and prevents the oil leaking pass it. All pressure seals work with the same principle. An O-ring is the most simple seal there is in a hydraulic cylinder.