How does a hydraulic cylinder work?

According to Pascal’s principle, the pressure is equal to the force divided by the area on which it acts. A pressure used on a piston produces an equal increase in pressure on the second piston in the system. If the area is 10 times the first area, the force on the second piston is 10 times greater, even the pressure is the same throughout the cylinder. The hydraulic press creates this effect, based on Pascal’s principle. Pascal also discovered that the pressure at a point in a fluid at rest is the same in all directions; the pressure would be the same on all planes passing through a specific point.

Let’s exlpain a bit more. In the example below, a small force F1 applied to a small piston of area A1 causes an increase in the pressure in the fluid. According to Pascal’s principle, this increase is transmitted to a larger piston of area A2 by exerting a force F2 on this piston.

The pressure is the applied force over a surface as; P=F/A >> F is the used force and A is the surface area. 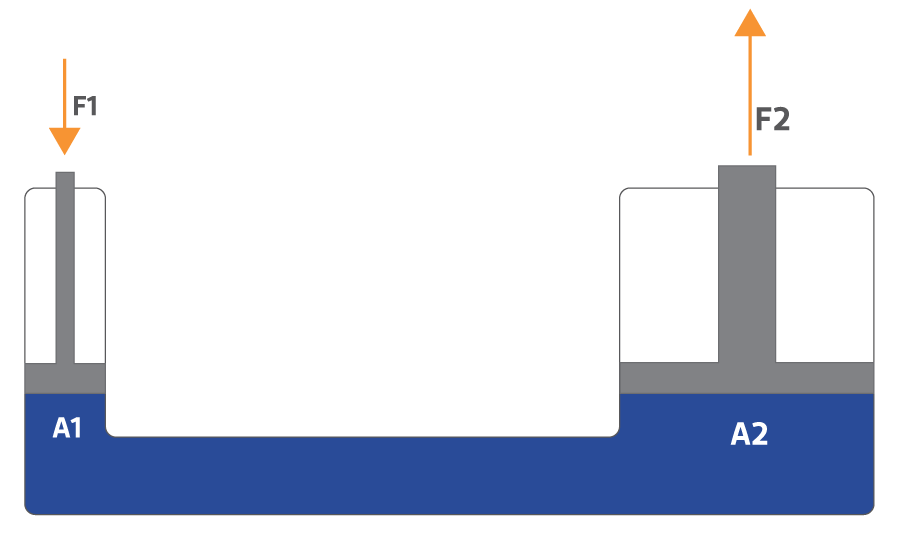 There are two pistons on either side of the container, and the container is filled with incompressible fluid like oil. The pressure applied will be transferred equally and undiminished to all parts of the system.

Because of the facts explained above, we can conclude that the power density in the hydraulic cylinder is big; a great force can be created even with a small cylinder. The seals keep the fluid where it needs to be; inside the hydraulic cylinder. The piston seal keeps the pressurized fluid in A and B chambers. In a double-acting cylinder, the A chamber is the one that creates the pushing force and the B chamber creates the pulling. In a single-acting cylinder, typically, there is only a rod seal because the other chamber does not exist. We will tell you more about double-acting and single-acting cylinder in our upcoming blogs.